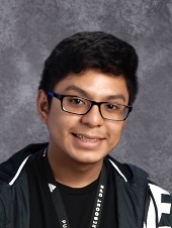 Kevin Hernandez describes himself as funny, smart and bilingual and also believes them to be the reason he should win for Mr. Norristown. During his years at Norristown he has participated in Soccer, Tennis, Blue and White Society, DECA, Mr. Norristown, and Quizbowl. He spends the majority of his time at school and work. A role model in Kevin’s life is Madame Shahin because she helped him become multilingual.  Kevin adds that his favorite food is anything with protein and as of this profile the last song he listened to was “Go Legend” by Big Sean.