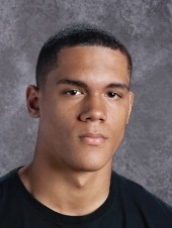 If you don’t know Jeremiah by name, its possible you know him as the really tall guy who plays the saxophone at Basketball games. Jeremiah has attended Norristown all four years and believes that he should be Mr. Norristown because he has a positive influence on others. Throughout his enrollment at Town, Bynum’s  participated in Track and Field and football. He spends most of his time trying to avoid procrastination (who isn’t?) and enjoys eating Chick fil A. Jeremiah considers Dr. Samuels to be an inspiration/role model in his life because she taught him “how to stay on his hustle and grind, avoid the haters and chase that paper.” When he leaves school, Jeremiah hopes to make a career that involves him teaching music.