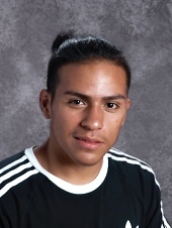 Jesus describes himself as athletic, funny and smart. Throughout his years at NAHS he has participated in NAHS Step, Varsity Boys Soccer and UNIDAD. In five years Jesus sees himself having his own house, majoring in business and becoming a police officer. He spends the majority of his time playing soccer and working. His favorite foods are Quesadillas and Pasta. Mr. Moon is a fictional character that Jesus said he would like to meet because he never gave up on what he wanted. Jesus feels that he deserves to win Mr. Norristown because “Ever since my freshman year I would see the Mr. Norristown shows and I would say that I would be the next Mr. Norristown.”