Everyone has an attraction towards certain brands of clothing. Some like Nike, Tommy Hilfiger, GAP, and many more brands that are popular with the people from all ages. A brand that is particularly seen amongst the youth more is Supreme.

Supreme first opened up in 1994 in Lafayette, New York. It’s not owned by one particular person but a group of skaters and artists that decided to collaborate with each other and became the staff and crew. Supreme is known for its simple logo. A red rectangle box with the word supreme in it. The brand is often worn by teens, particularly skaters and punk teens. Supreme has only five stores available in the world. One New York, Los Angeles, London, Paris, and Japan. Supreme also has a website and an app where you can purchase clothing worldwide.

The culture of Supreme is within the youth. Punk Rappers, skaters, and celebrities wear supreme. A lot of teens look up to these figures and go along with them which is the point of supreme, to stand out and be unique. Vincent Milito (11th grader) is a fan of Supreme. He found out about it through skateboarding and coming across videos. Supreme has lasted 22 years and continues to spread because of this and collaborations. The style isn’t something you would see everyday, it usually makes you stand out and show off the idea that you wear Supreme. 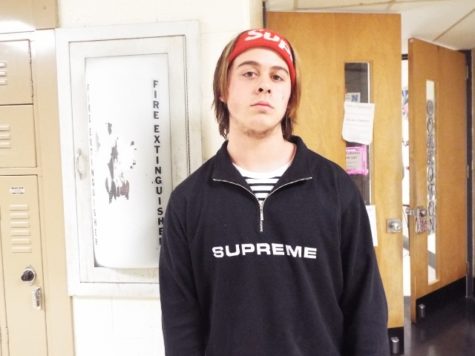 Luis Parker
Imagine all the brands you wear and like, Supreme has most likely done a collaboration with that brand. Supreme has collabed with Vans, Nike, Louis Vuitton, and even MTA in New York. Supreme may sound cool, but it’s not cheap. As Milito says in an interview “Supreme is crazy expensive.” Prices can range from $10-$1,198 on all store items. The worst part is, people buy supreme as soon as the website restocks and resell the brand for more, way more. The main reason is due to Supreme stocking limited quantities of clothing.

Supreme is a brand that is rare and exclusive. It makes you stand out and people will notice it. Supreme opened a lot later compared to popular brands, but Supreme is gaining popularity and soon people may start wearing Supreme like their other brands.