As iPhones Evolve, Are They Really Getting Better? 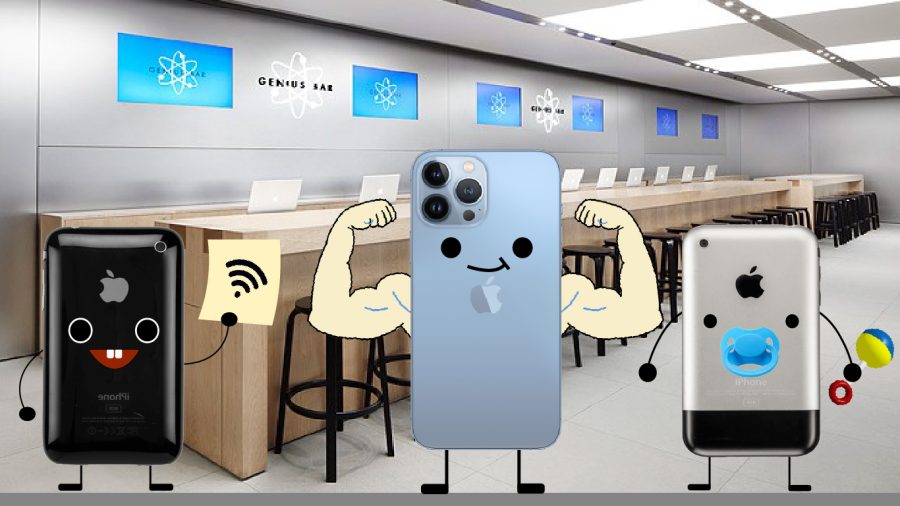 Is your phone near you right now? I’m betting most of you said yes. And there’s a pretty high likelihood that it’s an iPhone. I mean, whenever a new one is released, millions of people go out and buy it. And with the recently advertised iPhone 13 Max released, perhaps it’s time to take a step back and look at the iPhones of years past and laugh at how slow and inferior they are to the iPhone of this decade.

For example, if you have an iPhone 6, you’ll have to charge it 2-3 times a day, but the iPhone 13 can last you about 10 hours. Even looking back at the first iPhone, it doesn’t have an app store. How am I supposed to play Fun Race 3d if there’s no app store?

Let’s start off with the first iPhone ever released: The iPhone, the phone that started it all. It had a widescreen, yet it still fits in your pocket with its simple and intuitive design. Plus, 50% of the phone wasn’t just a keyboard. Honestly, I could write an entire article just talking about this first iPhone, but that’s mostly just because all the other competitors were literal trash. Just an absolute dumpster fire. They don’t even deserve to be mentioned. Seriously, who came up with the idea to put a keyboard ON the phone and crush down the screen? Not only that, but you could rotate the iPhone anytime you wanted to switch between landscape and portrait. And as a bonus, all of this could be controlled with your finger. Blackberry never stood a chance.

So we had the iPhone, which means the next one should be the iPhone 2, right? WRONG. The next iPhone released was the iPhone3G. Can you guess what’s so special about this one? That’s right it: has 3G data and it’s the first iPhone to have the App Store as well as GPS tracking! It sounds better at everything, but unfortunately, it has a battery smaller than the original iPhone; thus, it dies faster. Most important, it was the first iPhone to have emojis!

Next up, the iPhone 4? Nope, never mind, it’s the iPhone 3GS. The S on the end is thought to mean speed because the phone is basically the same except the internal materials got updated, so it runs faster. At least you can record videos now though.

Now we can talk about the iPhone 4, which was one of the most anticipated phones ever. It did a lot, including (but not limited to) double the number of screen pixels, apps can now run in the background, selfie cam, FaceTime, and more. The iPhone 4S was also released, but it didn’t do much except improve speed and introduce Siri (does the S actually stand for Siri?).

The iPhone 5 is the first iPhone to have a larger display (4” instead of 3.5”). Now it even has 1 gigabyte of RAM. A year later, we got the iPhone 5S and the iPhone 5C. Along with more speed, the 5S added a crazy new feature: fingerprint recognition on the home screen button. While the 5C added different case colors… and was cheaper. That’s basically it.

The award for the first iPhone to have the camera pop out instead of being embedded deeper into the phone (or the reward for most sales) goes to the iPhone 6. It had more rounded corners and oval volume buttons, along with a 4.7” display or something, but who cares about that? The public wants more oval buttons. A year later, we got the 6 Plus. Why is that important? Well, maybe because the 6 Plus has a 5.5” display. But the 6 Plus had some durability issues and could even be bent, which mandated the 6S and 6S Plus to swoop in and fix these issues (along with more speed boosts).

If you were expecting the iPhone 7 to be next, you would be wrong. Because in comes the iPhone SE. And it has a smaller screen than the 6 (at 4”). I guess we can call this the “Small Edition.” Additionally, it was cheaper, which is good for people on a budget.

After the SE comes the iPhone 7 and the iPhone 7 Plus. This time the 7 Plus isn’t just a bigger, bendier version like the 6 Plus was. The iPhone 7 Plus is different; it has two cameras. Yes, this is the first iPhone that had a second camera. Not only that, but this iPhone also got rid of the headphone jack, just to nudge more people in the direction of AirPods, which were revealed at the same time.

The iPhone 8 and 8 Plus came out and everyone forgot they existed. They only added minor improvements and were immediately overturned by the iPhone X. It completely gets rid of the home button and presents hi-tech facial recognition, along with basically everything being redesigned or reworked. Unsurprisingly, this ended up being the first iPhone to have a price tag of $1000, causing every other phone company to say *Gasp* we can charge THAT much and people will still buy!? Thanks, iPhone X.

Now let’s talk about the iPhone XS, iPhone XS Max, and the iPhone XR ( I think this is the point that everyone got fed up with Apple’s naming scheme). iPhone XS acts in the same way as all the other S’s, but it’s faster. The iPhone XS Max is actually just an iPhone XS Plus but they changed the name from Plus to Max. As such, it has a bigger screen, coming in at 6.46” which is the largest size yet (of course, this isn’t the only 6.46” iPhone, they just haven’t increased the screen size yet). But, all of these were expensive, so out came the iPhone XR. It’s cheaper, it’s smaller, and it comes in different colors. (This phone was still overpriced for what you got, coming in at $750, but Apple didn’t tell anyone.)

Then, as expected, out came the iPhone 12, the iPhone 12 mini, the iPhone 12 Pro, and the iPhone 12 Pro Max. Each was less rounded at the corners than the iPhone 11s. The iPhone 12 mini isn’t even all that mini, as it’s the exact same size as the iPhone 8 Plus, which was just four years ago. The standards for phone size truly have changed. Now, of course, it came with all the usual improvements but really, the only thing we’ll remember about these phones is that they were the first phones to not come with their charger, which forced you to buy chargers separately. This squeezed 19 extra dollars out of all their customers. Great job, Apple.

So after 33 iPhones and 15 years, these are the phones we got. Some people are content while others think Apple has stopped innovating, and some people never want to go near an iPhone ever again. To be honest, I’m just hoping the iPhone XX doesn’t ruin the naming scheme as horribly as the iPhone X did.