Marvel Continues to Sling out Hits with ‘Spider-Man: No Way Home’ 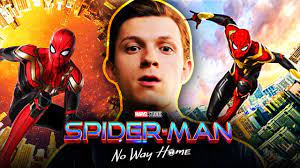 Marvel’s “Spider-Man No Way Home” was released on December 17, 2021, and people are going crazy. Tickets are selling out and movie theaters are filling up. Even non-Marvel fans couldn’t wait to see this movie and they had every reason to be just as excited.

In “Spider-Man No Way Home” Peter Parker (Tom Holland) wants everyone to forget that he is Spider-Man because his identity was revealed at the end of “Spider-Man: Far From Home” by Mysterio (Jake Gyllenhaal), who made everyone believe Spider-Man/ Peter has bad intentions with Stark (Robert Downey Jr.)  being gone. Peter goes to Doctor Strange (Benedict Cumberbatch) for help, Dr. Strange attempts a spell but Peter interrupts and asks Strange to adjust it so the people close in his life like Aunt May (Marisa Tomei) and Happy (Jon Favreau) could remember him too, and the entire spell is ruined. This corrupt spell causes the multiverse to open up and Spider-Man’s enemies from two other universes to come into Peter’s universe and now he has to get rid of them.

Holland, my favorite of the Spider-Man actors, takes it to the next level in “Now Way Home.” Holland has always played Peter Parker to the T and in this movie, he is even better. Over the years, his role as Peter has grown on him and he has gotten more comfortable with the character. Holland projects Peter’s loyalty, bravery, and nerdiness. He plays a great mixture of both Peter and Spider-Man, not too much or less than the other. Some people believe that Tobey Maguire and Andrew Garfield, the past actors for Spider-Man, were either really good at being Spider-Man or really good at being  Peter. They both couldn’t balance out both characters.

The acting in this movie really stood out. All the actors strongly delivered their characters. Willem Dafoe brings so much to The Green Goblin, one of the main villains. During a scene in which Spider-Man is fighting the Green Goblin on a bridge, you feel on edge and scared as if you are there. Dafoe plays the role with so much power and his facial expressions were on point. We all know that Zendaya does a wonderful job as an actor but in this movie, it was great to see her deliver a more emotionally driven role as her character MJ compared to the previous Spider-Man movies. In the previous movies she played a dry girlfriend but in “No Way Home” she gives a more emotional role because of all the events she goes through, such as being seen with Spider-Man, villains trying to destroy their world, and stressing about Peter’s safety.

There is never a dull moment in this movie. If there isn’t an action-filled scene, there is comedy, and if there isn’t comedy, there are fascinating insights. The multiverse, which is obviously the biggest insight, pulls you in with its chaotic yet exciting nature. Doctor Strange sheds light on this topic in the movie. He tells Peter how there are thousands of universes and he makes sure nothing dangerous happens if beings from multiverses come to theirs. While learning about the multiverse and seeing what happens when they all open up, it gives you such a rush. What makes it so spectacular is seeing all the universes open up, it literally rips through the fabric of your universe and you can see into others. We all have only heard and seen little glimpses of what the multiverse is and what could happen if anything goes wrong, now we have finally gotten a firsthand experience.

The visuals in this movie are insane, especially during the Doctor Strange sequences. When Strange first attempts the spell, it was disastrous to see their universe explode open. During another scene, Strange does a spell to the mirror dimension where it’s like looking at the world through a telescope. Later on, we see that their universe was ripping open because other universal beings were coming through. It felt out of this world watching shadowy figures walk towards us.

This movie completely pulled on your heartstrings from gut punches to feeling all the love. Seeing the three Spider-Men work together gives you such a warm feeling. Their relationships were so natural and heartwarming. It would have you cheesing from ear to ear. We all know that Peter holds so much responsibility with being Spider-Man. Holland catches the stressful and traumatic parts of that intensely. Peter goes to Strange for the spell because he doesn’t want the people close to him to get hurt because they are associated with Spider-Man. Peter constantly tries to clean up after everything he has done in the movie. Watching Peter grow into being Spider-Man makes you feel like a proud mother. He is growing into his individuality and I’m so glad for him.

Once again Marvel has dropped another hit with “Spider-Man: No Way Home.” It captures the excitement, emotion, and morals very well. Peter made a decision that could have gone poorly very quickly but he stuck with his morals and did the right thing. Every villain coming from a different universe was thrilling as they provoked Peter’s universe so much. The emotions throughout this movie were skyrocketing, you could feel everything the characters went through. The full theme of responsibility is shown throughout this movie and it played a very important part in Peter’s character development.