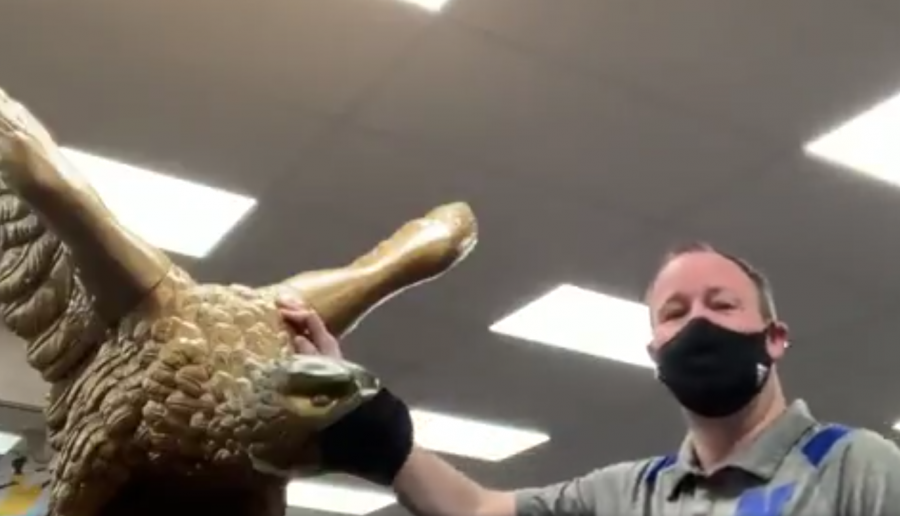 Mr. Roth will be spending the day saying goodbye to the building he spent his last 4 years.

After serving as principal for four years, Mr.Ed Roth will finish his last day at Norristown Area High School today, moving on to a similar position at Penncrest High School. His role as principal has already been taken up by former assistant principal Dr. Dietrich McGriff. Mr. Roth stated the main reason he is leaving Norristown is to be with his family more often so he could have the ability to spend more time at home with his kids more often since Penncrest is only ten minutes from his home.

“With Covid, I got to spend so much time with them, I think I started to realize what I was missing,” Mr. Roth said. “I feel like I owe it to my family to at least try,”

He explained how he loved his time here with everyone, but his favorite parts were the various events from sports games to concerts and even proms.

“I’m blue and white through and through,” he said. “I’d like to continue to be a part of the community and give back.”

Mr. Roth believes the school is in good hands because there are hard-working teachers who work behind the scenes and push for change, awesome students with great ideas waiting to be talked about, not to mention the assistant principals ready to support students and staff alike.

“Mrs. Dunston is like everyone’s favorite person on this planet because she’s amazing,” he said. “Dr. McGriff is this deep thinker but he also gets stuff done, and Mr. Webb and Ms. Vanbuskirk they’re new to Norristown but they’re just great educators and great people, and they have not hesitated at all to dive in and help make it better. And I know everyone will keep doing amazing things even long after I’m gone.”

Though it may feel like Mr. Roth has been with us a long time he’s only been principal for a few years. He didn’t even originally intend to become a principal. His original major in college was journalism, but halfway through he decided to switch gears. He started as a social studies teacher at Upper Darby High School but slowly got more involved in education by becoming a basketball and baseball coach, freshman academy facilitator, lead teacher, assistant principal, and eventually a principal. In 2017, he was hired to become principal at Norristown Area High School.

“I don’t think there is much I would have wanted to change,” said Mr. Roth. “I’ve had such a good experience here, I wouldn’t have wanted it any other way, because in 25 years, no let’s face it, in five years, I’ll just be on a list of people who were principals of the school. And that doesn’t bother me too much.”

Mr. Roth doesn’t want anyone to think that his leaving is representative of him trying to escape or flee.

“There is a certain guilt that comes with leaving though, this isn’t just one of those jobs that you can leave and forget about it within a month. Especially now with the virus going around, but I think the school will be perfectly fine without me,” he said. “Because let’s be honest, I’m not the most integral part of the school. The real magic is in the classrooms,”

This may not be the last we see of Mr. Roth though, because he hopes to return one day in the future. He trusts we will continue to be ourselves and lead. Though he isn’t leaving at the best of times, he still believes we are all great, especially when we band together.

“I’m sad because I feel like I’m leaving a family. With all the things going on it feels like it’s just a really crummy time to jump ship. For those who think I’ve done a great job they probably give me more credit than I deserve.”

Mr. Roth is going to miss us, but he insists that this doesn’t have to change how we think about each other as a community.