What’s the Game Plan? How Athletes Feel About the Unpredictability of the 2020-21 Sports Seasons 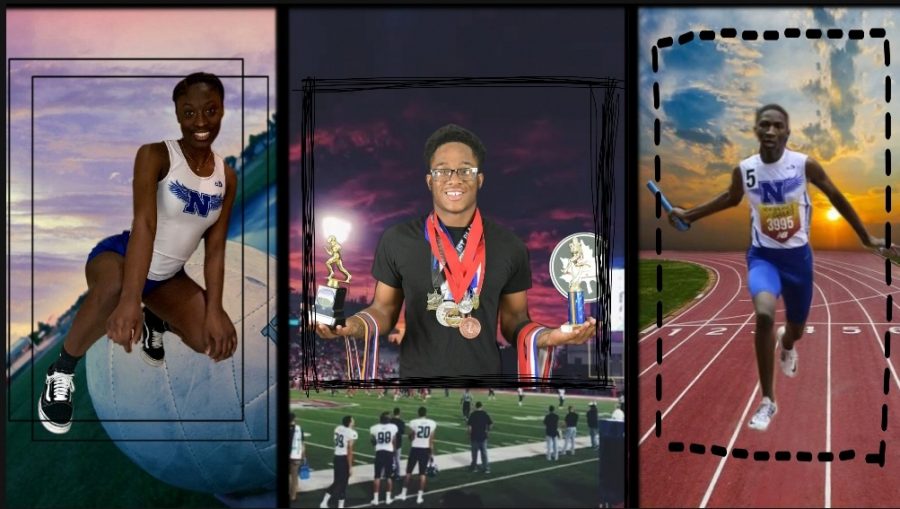 (from left) Antonique Anguin, Elijah Twyman, and Jamie Miller spoke with the Wingspan about how the Covid-19 pandemic has affected their senior sports seasons.

A life without sports seems nearly unimaginable for any committed athlete, but because of the detrimental effects of COVID-19 sweeping the nation, this year’s sports seasons have been put on hold for hundreds of athletes in Norristown. Although the winter, spring, and fall sports seasons are expected to be played this year, with workouts for some teams already underway, there is still a lot of uncertainty regarding what those seasons will end up looking like, especially with rising COVID number all across the state. To better understand how this sudden change has affected different individuals, I spoke with three athletes from the class of 2021 to reveal their personal and honest perspectives on the lack of sports in their senior year and how playing benefits them in various ways. The personal opinions of these particular athletes do not represent all Norristown athletes.

Elijah Twyman, a running back on the boy’s varsity football team, has been playing football for eight years and counting. “I was really hoping this year was going to be a breakout year,” said Twyman. “That’s how all seniors are, they look at their senior year as the breakout year, everybody’s looking at them, and for them to take that away it was definitely a big impact on all the seniors in the nation.” Many athletes graduating from high school this school year were expecting to get a chance to showcase the best of their abilities to college athletic recruiters, which helps them to attain scholarships and opportunities to better their futures.

Jamie Miller, a sprinter on the track team that specializes in the 200 and 400 meters, has been running track for four years. “I’ve been keeping my options open,” said Miller. “COVID definitely changed my perspective on college.” Due to the uncertainty that lies within the decision of having an active sports season, athletes are starting to come up with various back-up plans in the event that they do not get to play this year, or are unable to fully get recognized by colleges for their athletic skill.

Antonique Anguin, a middle hitter on the girl’s varsity volleyball team, has been playing volleyball for almost five years now. She believes that being able to manage sports and academics at the same time is essentially a key aspect of being acknowledged by any college. “It’s just a big deal overall to be able to get your work done, and also stay on top,” said Anguin. “That’s how colleges notice you.”

Furthermore, the athletes spoke about how playing sports in high school is seemingly used as an incentive to maintain good grades in their classes. Since there is a requirement that athletes must be passing all classes in order to be eligible to participate in games and meets, it motivates them to do better on any tests or assignments that may be given to them during the sports season. Without sports, some student-athletes are bound to fall off in their classes because they do not have that extra motivator pushing them to work harder physically and mentally.

In fact, the relationships that athletes create among their teammates and coaches can have a positive and lasting effect on them throughout their high school careers and beyond. “Sports, in general, is like a second family,” said Twyman. “They’re going to tell you what you’re doing wrong, and then they uplift you, they actually care.” Having a sense of family is also important when it comes to traveling for out-of-state events for sports.

“My coach is kind of like a father-figure when we’re on the road,” said Miller. “And my teammates are like brothers and sisters.”

For many athletes, playing a sport is a form of self-expression. They are able to fully immerse themselves in something that they are skilled in and have the ability to feel good about it. “It brings my spirits up,” said Anguin. “You feel more empowered when you’re doing what you love.”

It’s also a way to release stress, anxiety, depression, and many other negative aspects that can be felt even on a regular day. “It allows me to express if I’m having any anger, doubts, or anything else,” said Miller. Any adverse feelings that may be felt by athletes tend to go away the moment that they start actively participating in sports, workouts, and other physically stimulating activities. Sports are, without a doubt, good for the mind and the body.

In order to stay active and solid during these questionable times, these athletes have incorporated numerous workout regimens and sports-related activities into their schedules. Twyman has been weight training and even joined a flag football league in September called, “UMPR Philadelphia Flag Football”. This football league has games every Sunday that challenges the skills and abilities of each player on the field.

Miller also incorporates some football workouts into his weekly routine on Sundays. He goes for runs and plays basketball to increase his cardio and maintain his track and field condition. Anguin has made it a habit to work out her entire body and go for runs whenever possible.

On October 8th, 2020 the PIAA announced that an alternate fall sports season would be arranged with nine participating districts one school starting March 1st. This accommodation would give athletes the opportunity to play one last time in high school before graduating and furthering their careers. “I definitely think it’s a step forward,” said Twyman. “But it’s not really permanent.” Nothing is absolutely certain in terms of this new plan for sports due to COVID-19, but it is something that we can all look forward to.

Despite the misfortunes and unpredictability that have been placed on sports due to COVID-19, the athletes at our school are still just as proud to be a part of the Norristown Eagles. “One thing that I love about Norristown is that no matter how many times other towns and cities count us out, we always come back stronger,” said Miller. “We always prove them wrong.” The athletes at our school are not only hard-working, but they’re also undeniably passionate about what they do. “Our grind never stops,” said Anguin.

It seems that only time will tell what the future holds for our dedicated athletes. Hopefully, the new year brings us greater fortunes, and a couple of wins (if that’s not too much to ask for).