A Balling Tribute To Kobe Bryant 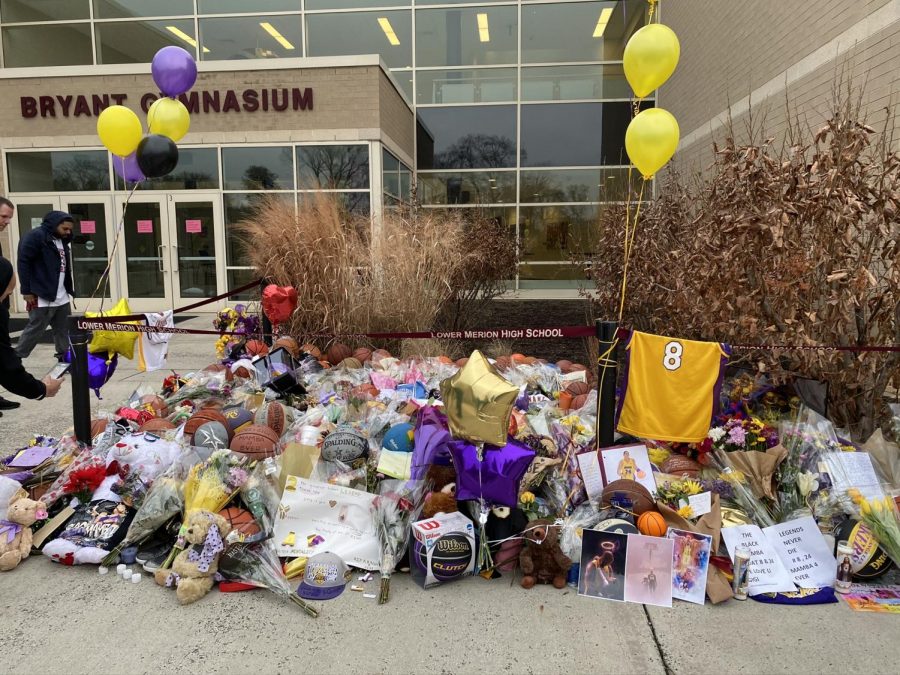 A memorial stands Lower Merion High School, Kobe Bryant's alma mater, which is fewer that 15 miles from Norristown. Bryant was drafted into the NBA directly from his high school.

A few Sundays ago, I was in my room scrolling through Instagram looking at the highlights from the previous night’s 76ers game against the Los Angeles Lakers, in which Lebron James passed Kobe Bryant for third all-time in career scoring. It was pretty impressive that he was able to pass Kobe even though he didn’t play as long as Kobe did. But as I looked some more a report from TMZ popped up on my phone as I refreshed my page: “Kobe Bryant has died in a helicopter crash that has killed everyone else on board” I was just so confused, not thinking it was real.

At first, I thought it was fake news because I just saw him on tv in Philadelphia last night. Then suddenly, tears suddenly filled my eyes. Then the same story started popping up everywhere. My parents were watching ESPN in the same room, so I looked at the tv screen, which read, “Breaking New Kobe Bryant age 41 has died in a helicopter crash” I was so confused.

Our legend, our inspiration, our idol, and our icon had been pronounced dead along with his child and 7 others. This was a heartbreaking tragedy not only to me but to so many others. He was only 41 years old with a thirteen-year-old daughter who was to carry on his legacy, Gianna was a mini version of her father, nailing down his fade away and everything. Kobe had a tremendous impact on my generation when it comes to the game of basketball. He gave us the mindset of never giving up, even when we feel weak.

I remember when I got my first pair of Kobes. I was in 4th grade and my birthday was coming up. Plus I loved basketball and I loved sneakers. My uncle always got me a pair of sneakers for my birthday every year, but this first pair of Kobes was called the Nike Kobe 8 System, and I couldn’t wait to wear them when I played basketball. As a basketball player, it made me feel like Kobe was with me while I was playing. Like when I shot I was doing it for him.

At school, whenever kids threw something in the trash, we would use to yell ”Kobe.” It was always just something we did to bring basketball into a school day. We always reenacted that. To yell his name made us feel great and as a piece of him was with us every time we took a shot.

Kobe once said, “The moment you give up is the moment you let somebody else win.” This mindset helped me with my own basketball ability. I always thought I wasn’t good enough and I just gave up easily, but hearing him speak these words changed my perspective. It seems like with my generation, that’s what we do, we give up. I enjoyed basketball a lot but the reason I thought I wasn’t good enough and watching my brothers played made me wish I could play as good as them. Without even thinking, we say “It’s too hard”, “I’m not good enough”, or “I give up.” Kobe helped kids keep striving to get better at the game and to not give up. Kobe taught us how to be the best version of ourselves through his game. He never stopped working on his game. His inspiration to be the best affected the style of his game. On January 22, 2006, Kobe went against the raptors, scoring 81 points in the whole game. Instead of going home after practice, he would stay for hours to get his game better. He wanted to be the best, and through his hard work, he did just that.

Kobe went to the NBA straight out of Lower Merion High School, just 20 minutes away from Norristown. He did many tremendous things in his life and always set his goals high. He ended his career with five championships, 15 All-Star Game appearances, four All-Star Game MVP Awards, two NBA Finals MVP Awards, and a single regular-season MVP Award.

Kobe worked to prove his haters wrong. A lot of people recognized his talent but didn’t give him enough credit because he was too young coming into the league. Kobe was drafted in 1996, round 1 13th picked. The number one pick was Allen Iverson by the Philadelphia 76ers. Many people didn’t like Kobe due to the “attitude” he gave off. He wanted to win, and he thought that he was the best possibility for his team to win, every game.

Many wish they had with their own children. wanted to play like him. Many people weren’t just inspired by his game but were inspired by the words he spoke. He even encouraged people in the league to play better. When Kyrie Irving became friends with Kobe, you could hear a lot of Kobe speaking from him. He began to talk more inspirational, seeing him shine through Kobe’s words.

Kobe and his daughter’s bond was made from love and basketball. They had an unbreakable bond that many wish they had with their own children. When watching Gianna play, many people could see Kobe in her. Watching her play gave people the same thrill they had while watching him play. They were all actually on their way to her basketball game when the fatal crash occurred. It gets sadder every day when you just take a minute to process this whole situation. It’s just really scary and crazy how someone so very loved can be taken from their loved ones, in a split of a second.

Kobe inspires others even after his death. This horrible situation has inspired many to reach out to people who they are on bad terms with and apologize for whatever happened and make things right again. Kobe showed us that there is more to life than fame and fortune. Kobe left his mark not only on our hearts but on the game of basketball as well. We will always remember January 26th as the day our legend died. Gianna and Kobe will forever be in our hearts.