Eagles’ Lose Tough ‘Battle of the Bridge’ to Upper Merion 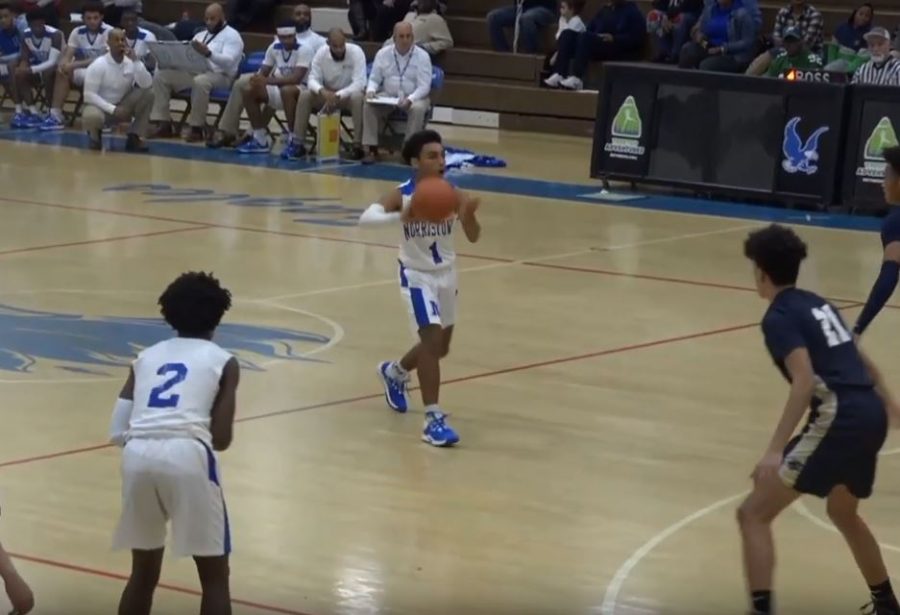 Point guard Cris DiNolfi sets up a pass to guard Marshall Baker in the Eagles' home opener against Spring Ford.

This past Saturday,  Norristowns’ varsity basketball Eagles lost a tough “Battle of the Bridge” to the Upper Merion Vikings 74-64. Each team worked its hardest to pull off the win, but with a stronger second half, Upper Merion came out the winner. Even though the Eagles didn’t win, it was a very exciting game to watch.

Upper Merion won the tipoff, but after an out of bounds pass, Norristown recovered and guard Willie Anderson put the first 2 points on the board with a lay-up. Both teams missed a lot of shots throughout the quarter, but by the end, Vikings lead 12-11.

Norristown started off the 2nd quarter with the ball. Forward John Paulino scored the first points after a rebound from a Vikings missed foul shot, giving Norristown the lead back. Although the Eagles missed easy lay-ups, the team earned its points this quarter from three-pointers and foul shots. At the end of the second quarter, both teams were tied 30 to 30. The game was so tense that the crowds supporting each team spent most of the half on their feet.

During the second half, the game took a rough turn for the Eagles.  Norristown received a technical for there being more than 5 players on the court. The Vikings would score on both foul shots following the technical. The Vikings started making shot after shot, but the Eagles couldn’t counter. The Eagles would go on to lose the game 74-64.

Although the Eagles lost, the game was well-played, and the crowd was energetic. The crowd was made up of both Upper Merion and Norristown fans, and even when the shots weren’t in the Eagles’ favor, Norristown fans still showed faith and support. The gym was so packed that Upper Merion had to expand it to fit everyone. It was a very beautiful sight to see so many people supporting their team.