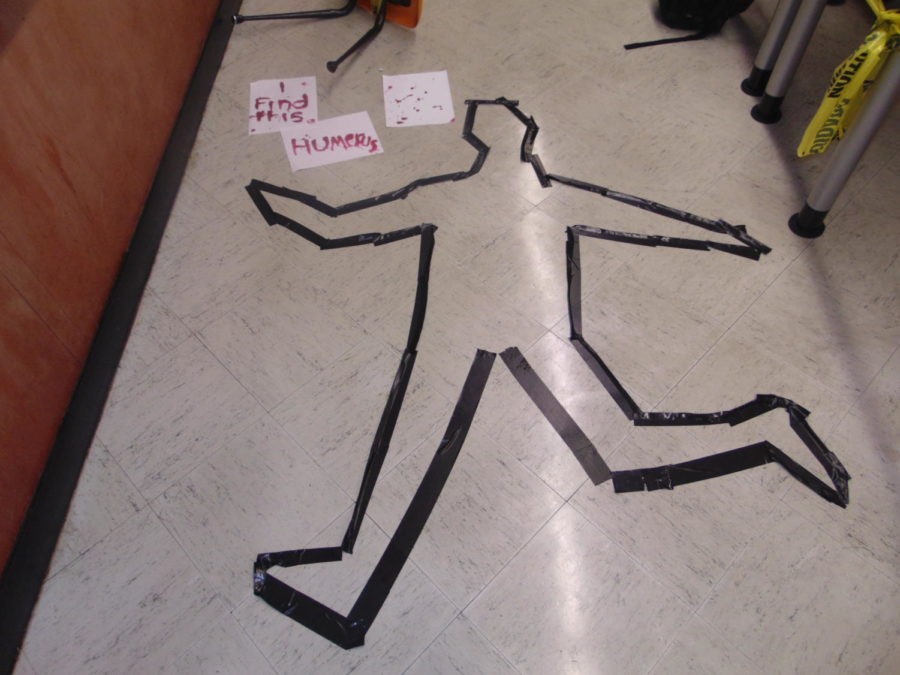 An elaborate senior prank caught Forensics teacher Ed Mountney a little off-guard when he noticed his room was transformed into a crime scene.

On Halloween, Forensics teacher Edward Mountney was in for a scare when he walked into room 220 and saw the crime scene of the murder he apparently committed. Seniors Gloria Lumbrano, Paloma Martinez, Talia Alvardo, Lizbeth Castro, and Chris Garcia worked together to prank Mountney’s Halloween.

When Mountney walked into his room, he found caution tape all over the place and a sign that said: “Do Not Enter Crime Scene.” He looked at the sign and was confused, “I thought something happened at first and saw the piece of paper hanging,” Mountney said.

There were cobwebs on the chalkboard, scary quotes on the whiteboard, and a suspect board with his face in the middle of it labeled “Main Suspect.” This creative prank took a lot of work and help,  so how did this idea actually become a prank?

Lumbrano stated that one day she and her friends were talking about Halloween and how cool it would be to pull a prank on the teachers. They thought since Mountney was a Forensics teacher and they all had him last year, he wouldn’t take it too seriously. “Halloween was coming up and we thought it would be a great idea and also it was on my bucket list,” said Lumbrano.

Although it was a good prank, they all wished they had more time to prepare everything and get more props to make the prank even bigger than it already was. Lumbrano stated that the difficulty with this prank was that it was in first period so she thought that she and her friends would have to rush to set it up. Mountney stays after school a lot as well so they didn’t want to get caught.

Besides feeling confused from the senior’s prank, Mountney felt surprised, intrigued and blindsided when he walked into that room. As he walked into the room, it took him a while to realize what was actually going on, “At first I thought something happened because there was a big sign in my face with what looked like a real police  signature, and then I thought was there something I didn’t know about,” Mountney said. “But then I saw people smiling and laughing so I was like okay and figured out what it was.”

Mountney was late to school that day so he rushed into first period, and getting everything ready for class, he didn’t have time to look around.

In the end, Mountney was impressed with how elaborate the prank was. “I thought they did a really good job,” he said. “You could tell they put a lot of time into it.”

Mountney will forever remember this Halloween as he got pranked by a bunch of seniors, but watch out because they aren’t done just yet. “We will hopefully do another prank like this or something else in the future,” Lumbrano said, “Whos’ the next teacher? You’ll never know.”