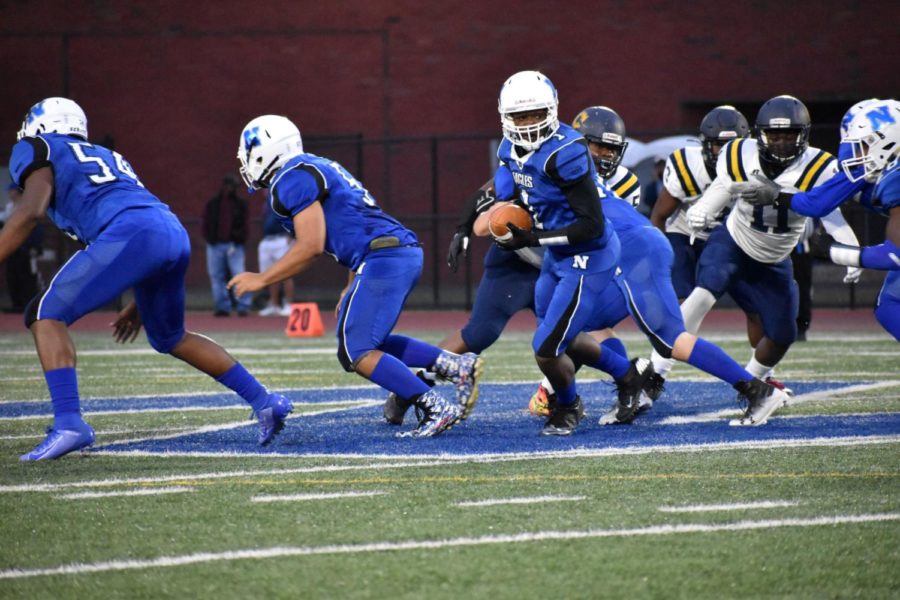 The Eagles ended up losing to the Cheltenham Panthers 48-14, but fans made up of teachers from all over the district, students past and present, parents, and other community members all came out to cheer the team and support the Norristown community.

Norristown Area High School hosted a tailgate in the forum outside the gym before the game, providing free food and shirts to all the NAHS students who attended. Students volunteered to face paint, while others were dancing and singing to the music that was playing so loud you couldn’t hear the person right next to you. Everyone was representing their school by showing off blue and white.

The team talked about the importance of the game and atmosphere. “I can feel the adrenaline running through my veins.” said assistant coach Coley Adams before the game.

Players also recognized how this could be beneficial to the program. ”I think this is a chance to be able to put Norristown football on the map,” said defensive end Donovan Noble.

In spite of that, head coach Joseph Milligan saw Friday night as “another game like any other.” He went on to say, “I’m excited for our first night game and happy for the boys, but no pressure at all. Thank god and all the people that made it possible.”

Notwithstanding the uneven final score, the Eagles and Panthers were neck and neck in the first half. In the first quarter, the Panthers fumbled the ball, and defensive tackle Jason Thomas took possession. The Eagles would get started in the second quarter with a touchdown by wide receiver Tyson Tate. The Panthers, however, then answered by returning a kickoff for a touchdown of their own, tying the Eagles at 7.

On the field, you could feel the tension and focus each player gave. On the bleachers, however, the crowd cheered, stomping their feet louder and louder. The crowd talked and laughed ,eating their food they got at the stands before entering the stands. “Lets go Eagles!” screamed the crowd, and the tone was set the whole night. Fans stood and waved their NAHS towels they were given in the entrance. A lot of people showed up for the football game, including alumni.

“It’s been pretty good appreciating the community.” added alumnus Jamila Royals. Many other appeared to support the team and enjoy a night under the lights.

During halftime, there were ceremonies honoring IBEW Local 98, the union that donated $125,000 worth of labor to put the lights, and NASD Chief Financial Officer Anne Rohricht, who secured the funding to purchase the lights and renovations.

Even after the fourth quarter, people still stayed and supported their team. “I was at the games at Roosevelt and here,” said Lisa Engleman, a fan and Norristown mother. “This is the beginning of a new era, the nest is complete. This is history tonight, and it is great to be part of it.”.

Cheerleaders stayed positive during the whole game and showed support, and many fans at the stands were still encouraging the football team. The bleachers were filled to the top with fans happy enjoying their time under the lights.

Even after the Eagles lost, NAHS spirit was still high. “Next game will be better,” said linebacker Kyle Duong after the game.