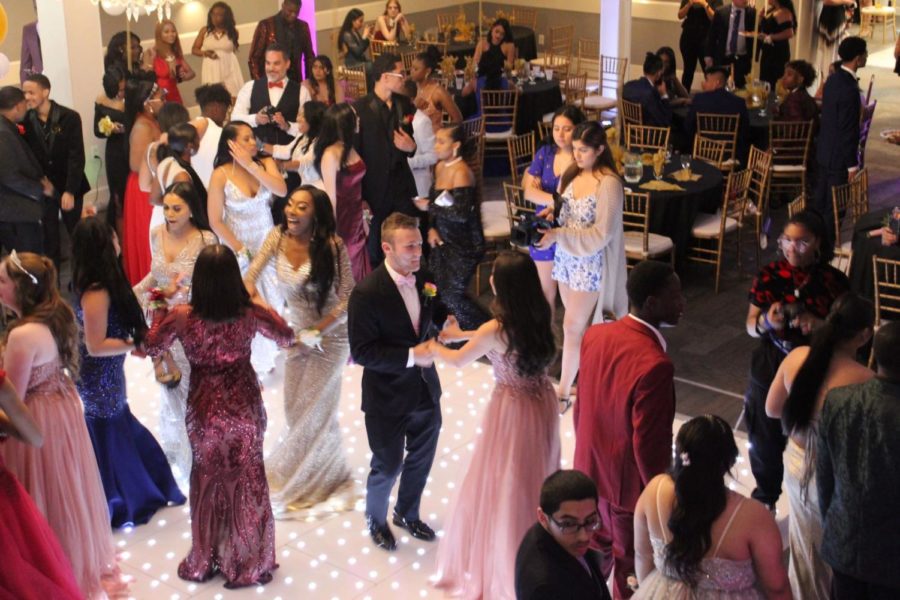 Norristown school-sanctioned dances are always fun and full of high energy, but this was absolutely killer. Dance battles broke out and there was something primal in the air as each song reverberated through your bones. This was simply a room full of people having unadulterated fun.

When you pull up to the Pavilion, more commonly known as the ‘Chateau,’ you’d find a bustling of people all decked out in fancy dresses and suits while limos lined the entryway as students began making their way into the building. Leading to the building was a towering white staircase that looked something straight out of a Disney movie.

Seniors loitered on the stairs and took pictures on the balcony, the sunlight brightening their photographs as more cars pulled up. Teachers from all grades stood in front of the doors to watch the students arrive. Some even climbed the staircase to take pictures with them as well.

When you walked inside of the chateau, the welcoming faces of Ms. Gilliam, Ms. Pileggi, and Mrs. Cincotti were there greet you. Behind them was a “Selfie Booth,’ which was used more towards the end of the prom. The first things one would see in the lobby are the trays of food set out for the party-goers and a taco bar set out for hors d’oeuvres.

The ballroom was an affair in and of itself. The dance floor illuminated the entire room and was the center of attention. The tables were black with gold decor, each packed with people, most of whom were hungrily waiting for dinner. This was apparent when after only an hour in, the food was served, and it seemed as if everyone in the building were waiting in line, which wrapped from the lobby into the ballroom.

After dinner, when everyone was a little more energized and the music washed over each teen. When Cardi B’s “Bodak Yellow” came on, a rush of bodies hurtled to the dancefloor. From Meek Mill’s ‘Dreams and Nightmares’’ to Daddy Yankee’s ‘Gasolina,’ to ‘Old Town Road,’ the entire room was pulsing as the seniors danced the floor. It was undeniable that the seniors didn’t care how they looked; all that really mattered in that moment was having fun.

Those who weren’t dancing were watching the dancers from the balcony of the ballroom, looking as if they were having an equally fun time as the people below. Even during the ‘Cupid Shuffle’, the onlookers still moved their feet along to the crowd. Others took this as an opportunity to grab more food while there wasn’t a line.

When the party was over, and it was time to leave the venue, the party-goers grabbed last chance to use the ‘Selfie Booth,’ or to grab cookies, brownies, churros, and cannolis for the road. The teachers began to shuffle out, and the limousines and cars from before began to pile in the parking lot again. Mentions of after parties were shouted in the courtyard, and in what seemed like an instant, the parking lot emptied, concluding an eventful night.